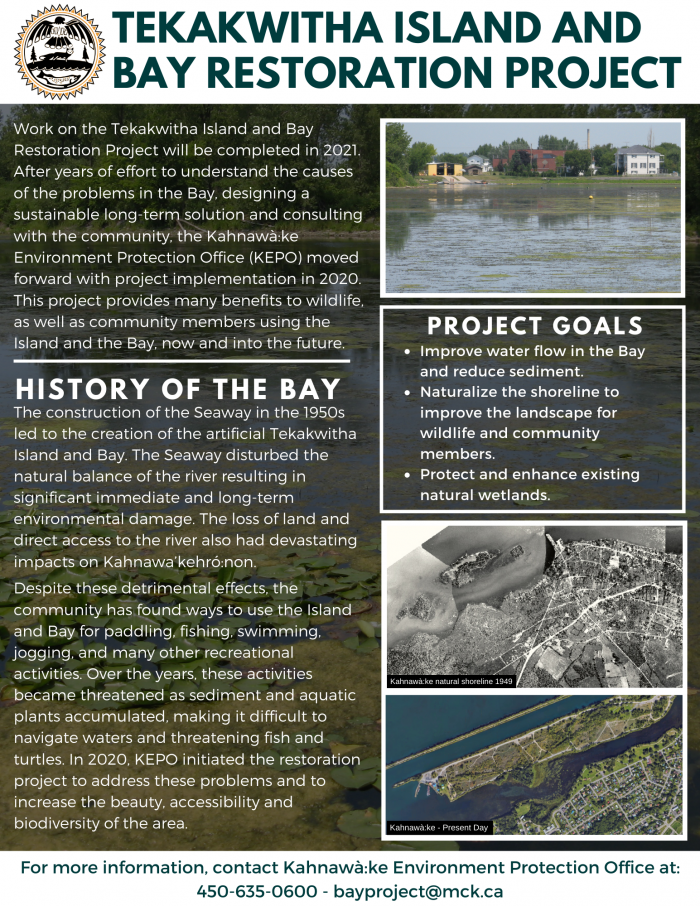 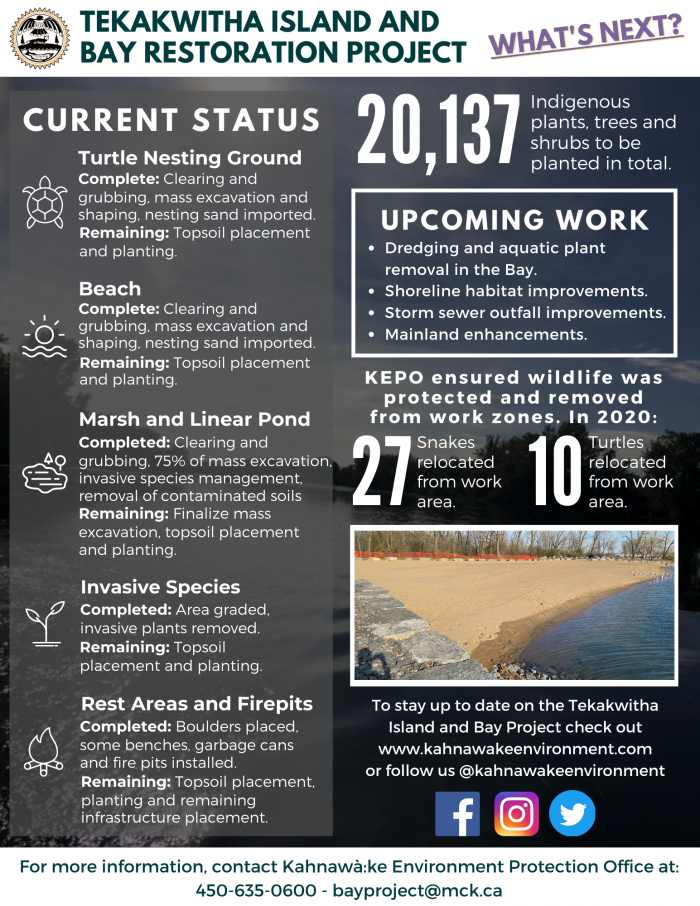 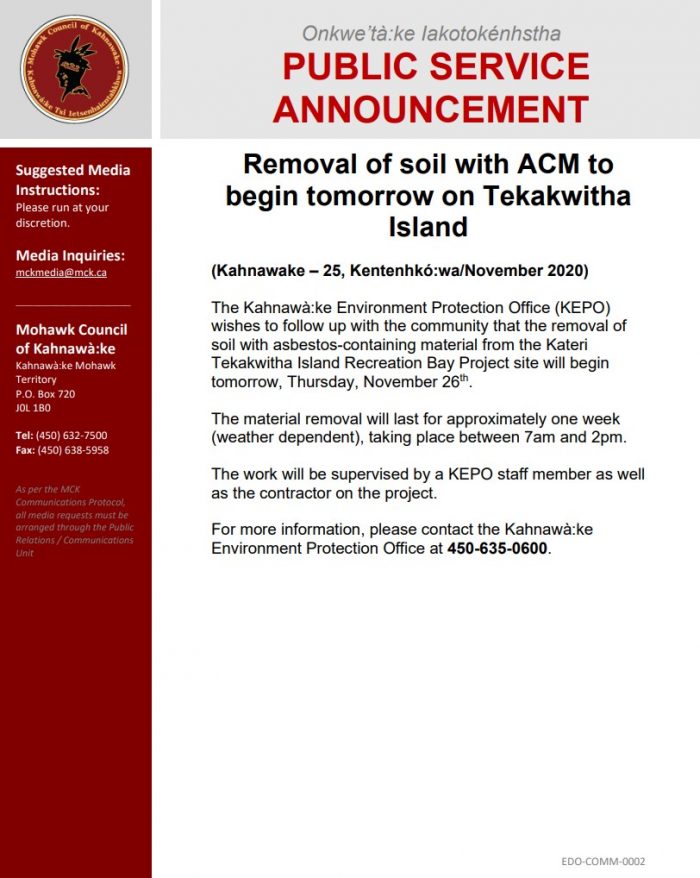 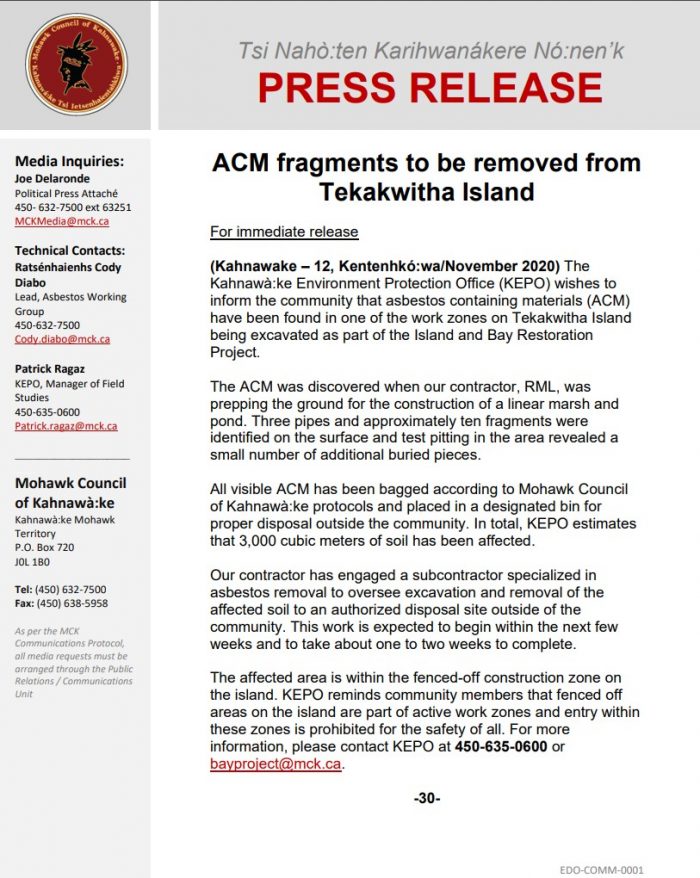 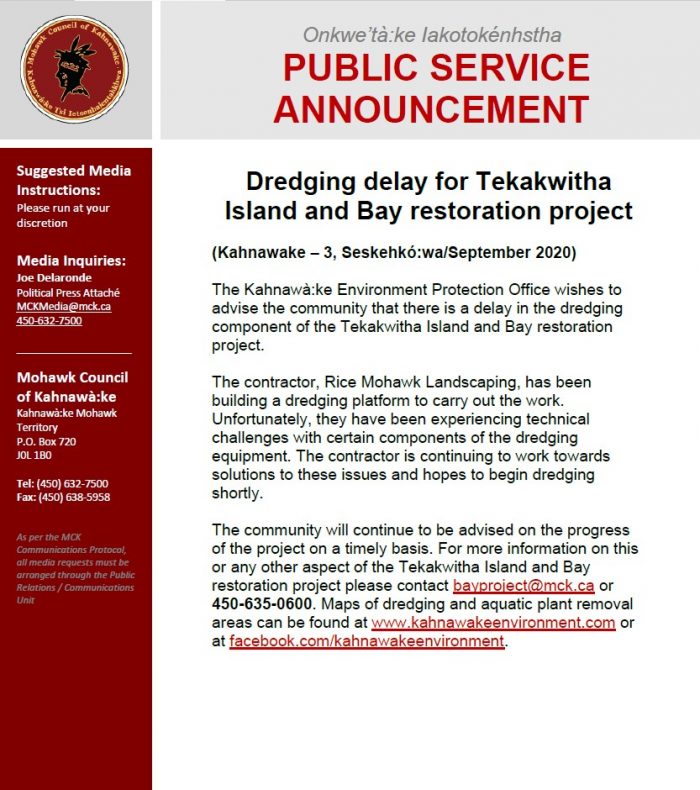 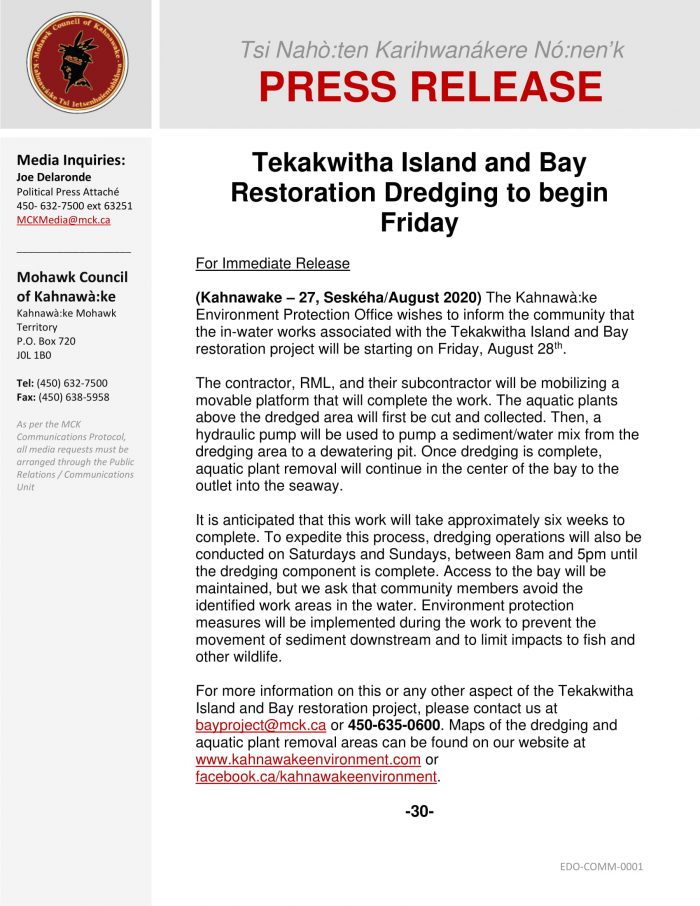 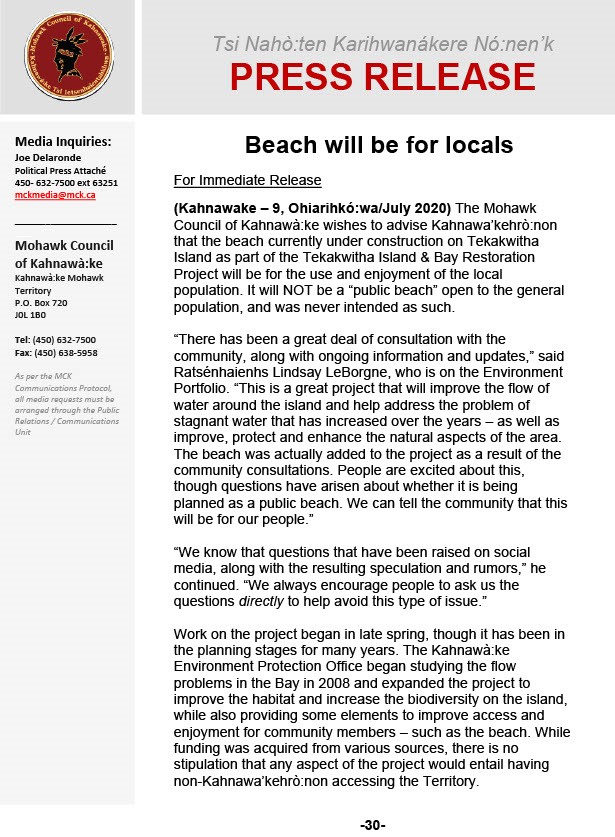 The Kahnawake Environment Protection Office (KEPO) would like to provide an update on the progress of the Tekakwitha Island and Bay Restoration project. Over the last two weeks, our contractor, Rice Mohawk Landscaping (RML), has been installing fencing to secure different work sites on the island and exclude wildlife. The removal of invasive plants on the Island has also begun with Wild Chervil, Phragmites, and Japanese Knotweed being excavated. Over the next two to three weeks, KEPO staff will be relocating snakes within two of the work zones destined to become new natural zones prior to the start of heavy excavation.

Meanwhile, RML will begin work on the new beach feature, located at the start of the island. In addition to the beach, two boat launches will be improved, and the parking area graded. The work at this location will be done in two phases to ensure that access to at least one boat ramp will be maintained throughout the work. The work in this area will last approximately one month.

Construction fencing will be installed around the work area for the safety of the community. KEPO appreciates the patience and cooperation of the community during this time.

The Kahnawà:ke Environment Protection Office (KEPO) is pleased to announce the beginning of construction for the Tekakwitha Island and Bay restoration project. The selected contractor, Rice Mohawk Landscaping (RML), will begin construction activities in the coming days, and work is expected to continue through October. KEPO staff and the project consultant, GEO Morphix Ltd., will be present on-site throughout the duration of the work.

Construction activities will result in closures of portions of the Island at different times throughout the project. RML and KEPO are working hard to limit the closures as much as possible, and clearly marked detours will be installed to divert pedestrian and bicycle traffic. The road to the Marina will remain accessible.

Major project elements include dredging a portion of the Bay, aquatic plant harvesting, the creation of two natural zones on the Island, a small beach for community members, and enhancements to the shoreline. 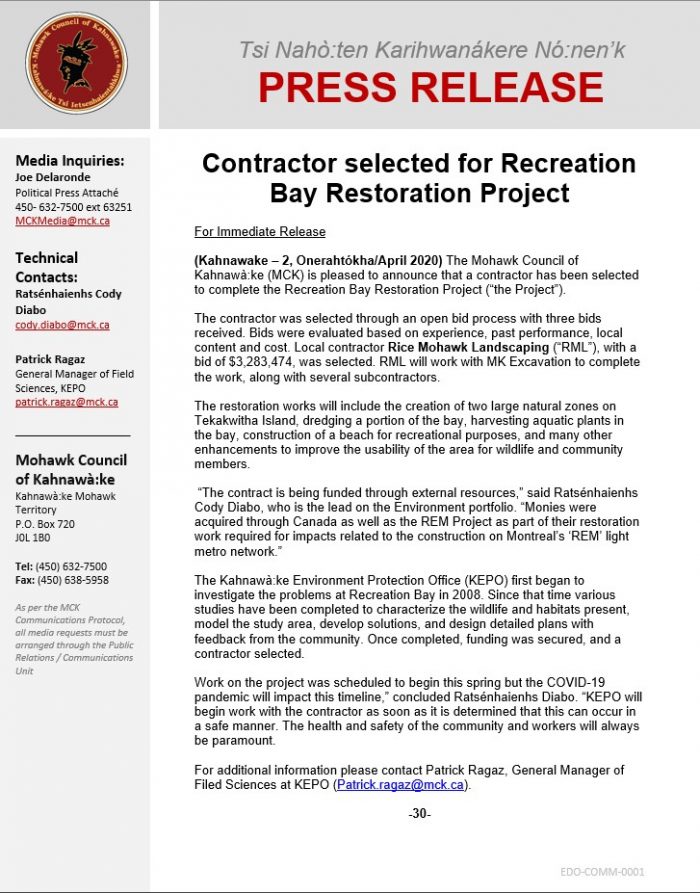 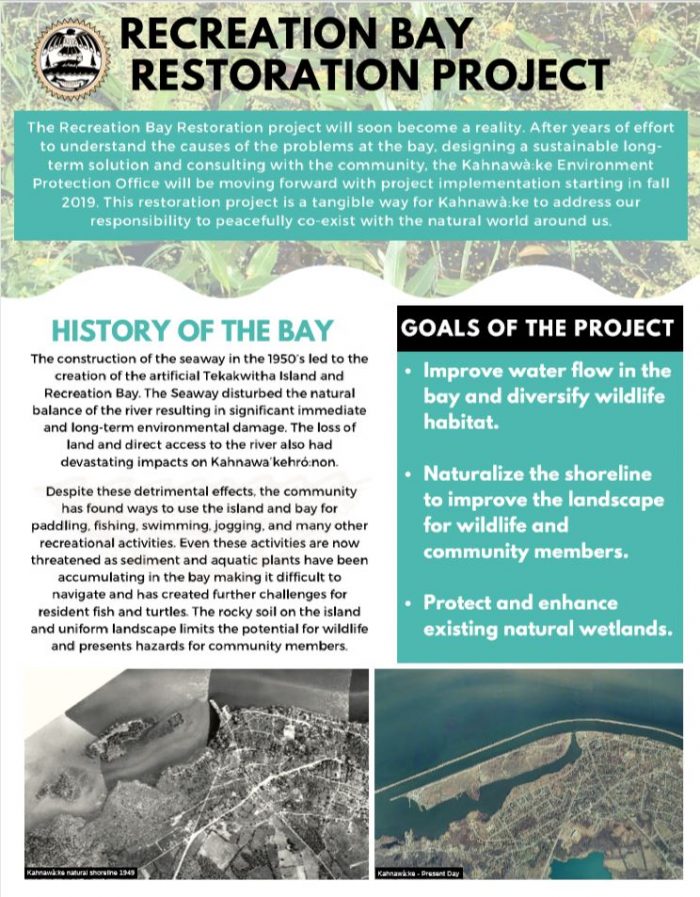 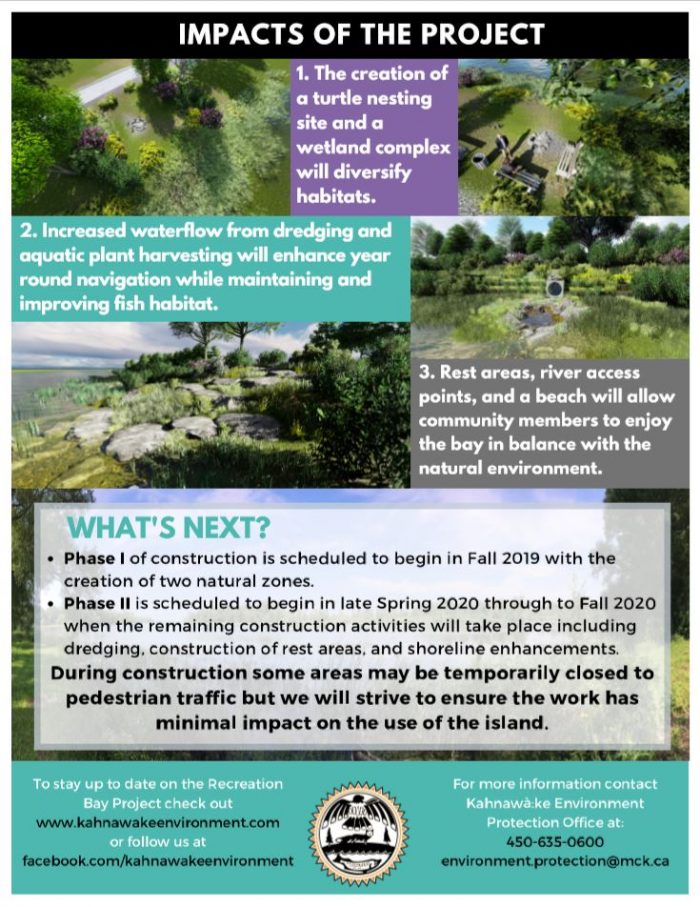 The construction of the Seaway severed our physical access to the river and caused damage to our cultural connection to the waters, and the foods that sustained us for generations.  The seaway also created an artificial environment and disturbed the natural balance that had formed along the banks of the St. Lawrence. The Kahnawà:ke Environment Protection Office has been studying the Recreation Bay for many years in order to understand the environment and come up with a long-term solution to the environmental challenges.

The low flows and wide area of the bay have been causing sediment carried from faster waters upstream to drop in the bay, slowly filling it up. The sediments coming from the Chateauguay River are very high in nutrients because of upstream agriculture and therefore aquatic plant growth is favoured and occurs very quickly. The challenge for KEPO is to develop a solution that will prevent the loss of the Recreation Bay and that will be sustainable over the long-term. KEPO has been working with experts to assess and design solutions that will meet this challenge. 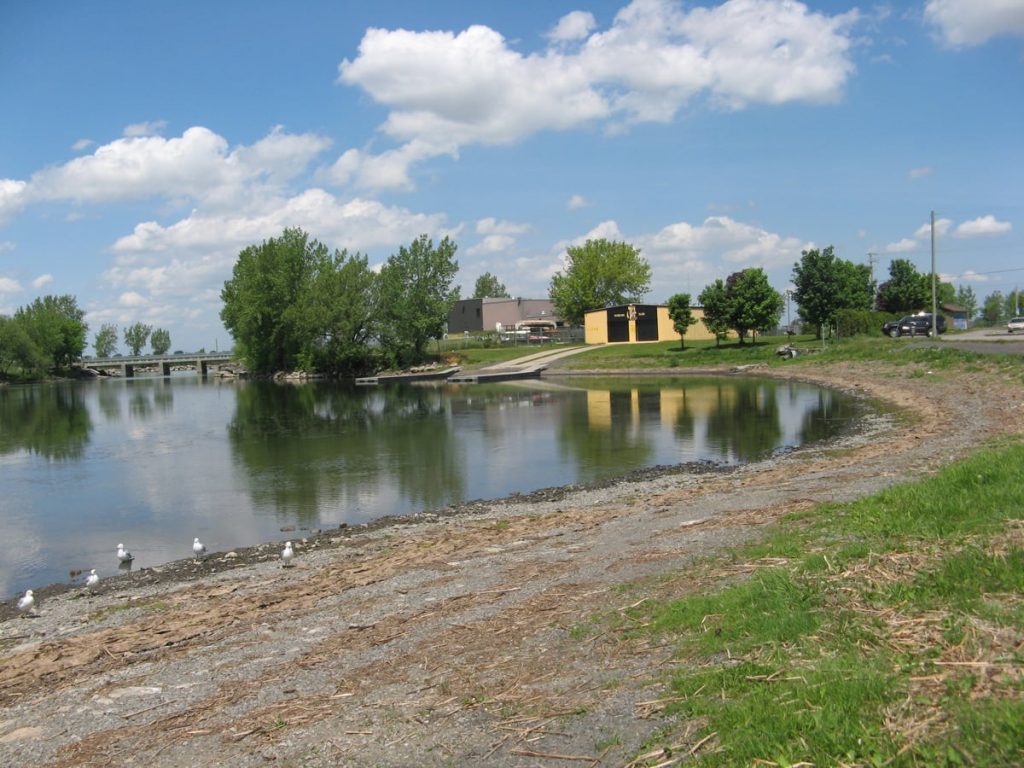 The following studies have been carried out in and around the Recreation Bay. These studies can be viewed in their entirety at our office. Here is a summary:

This study was the first step in characterizing the health of the bay and the Kahnawà:ke shoreline more generally. It assessed the degree of human impact on all the shorelines in the community, including the Recreation Bay. This study confirmed the extent of sediment that had accumulated and also measured the high levels of phosphorus and biological oxygen demand in the water (these parameters confirm the presence of agricultural nutrients). 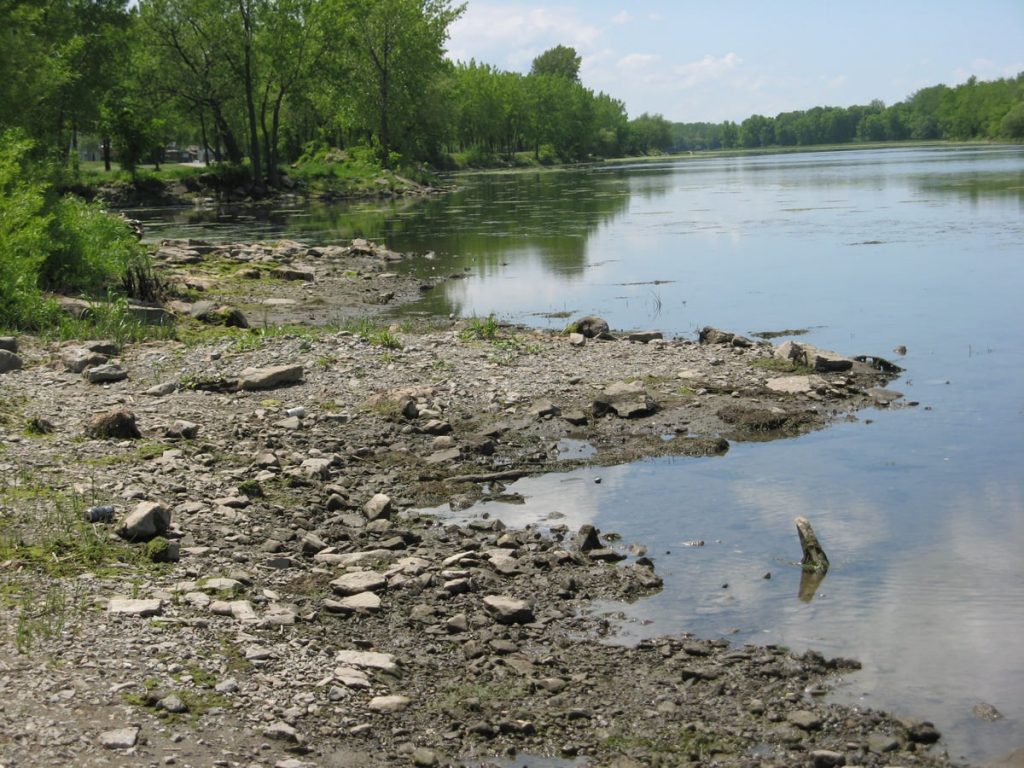 This study built on the work from 2008 with a specific focus on the Recreation Bay and was an attempt to determine the cause of the problem. The depth of sediment in the bay was measured in more detail and mapped. The study revealed that the area just downstream from the remnant natural island (a bottleneck) had the most sediment and this area was identified as a ‘shoal’. A preliminary model was completed that assessed the improvement to flow in the bay by the construction of a 10 m wide channel through the sediment.

Whenever major work is considered, including dredging, it is very important to understand what the potential environmental impacts of the proposed work may be on the existing wildlife. To understand this, we needed to know what species were present in the bay. Fish surveys were done in numerous locations within the community including in the bay and also identified important habitat. The study concluded that the Recreation Bay was considered ‘very good’ fish habitat. Fifteen fish species were recorded in the inventory and they were generally healthy. The study did note, however, that the habitat was at risk because of the on-going sediment accumulation. 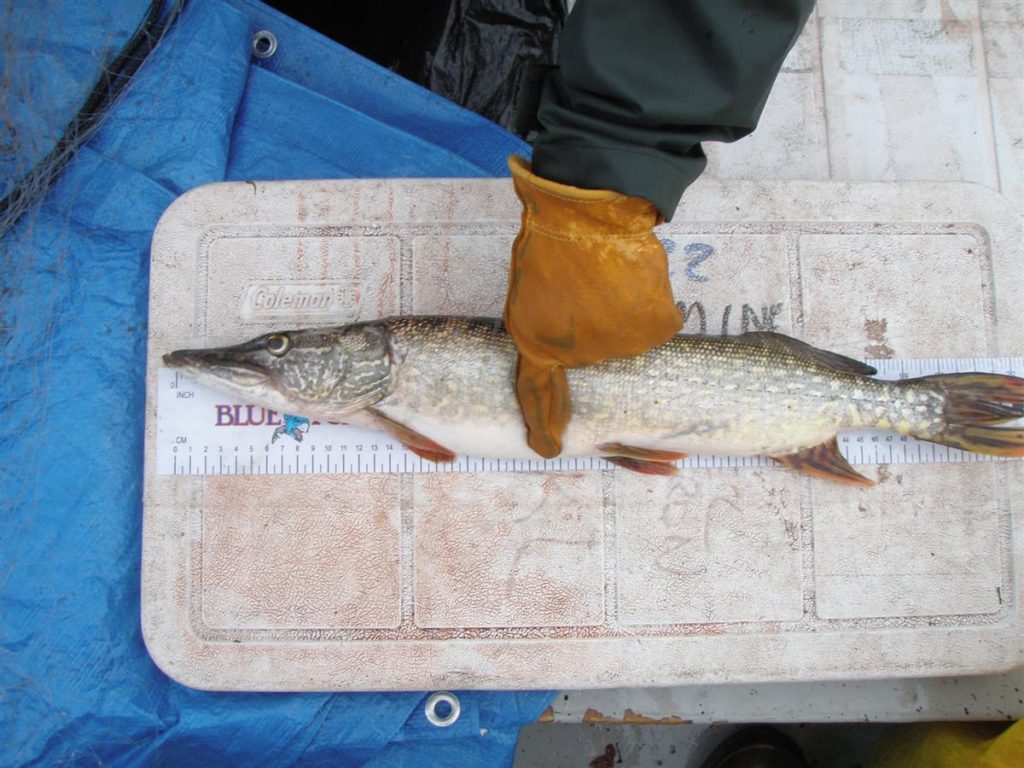 This study focused on the Recreation Bay and the development of a more comprehensive understanding of the species found there. We were specifically looking for Species at Risk such as the American eel and classifying the wetland habitat and plants found on either side of the bay. This work also concluded that the bay had very good fish habitat and recommended that work take place to maintain this habitat.

With the information gained from previous studies, we now needed to understand how we should intervene in the bay to ensure that we achieve our desired goal and the work will be sustained. We developed a three-dimensional model that looked at all aspects of the flow through the bay. This included consideration of waves, wind patterns, flows from the St. Lawrence and Chateauguay rivers, sediment loads into the bay from various sources and the operation of the Seaway Canal. Equipment was installed in the bay for two months, one month in the spring and one in the fall, to obtain an accurate picture of what was occurring in the bay.

We looked at how different strategies would affect flow and sediment deposition in the bay. Three approaches proved to be the most beneficial, particularly when they were all done at the same time. These included:

These three options were adopted as a preferred approach and were carried forward to the detailed design stage. 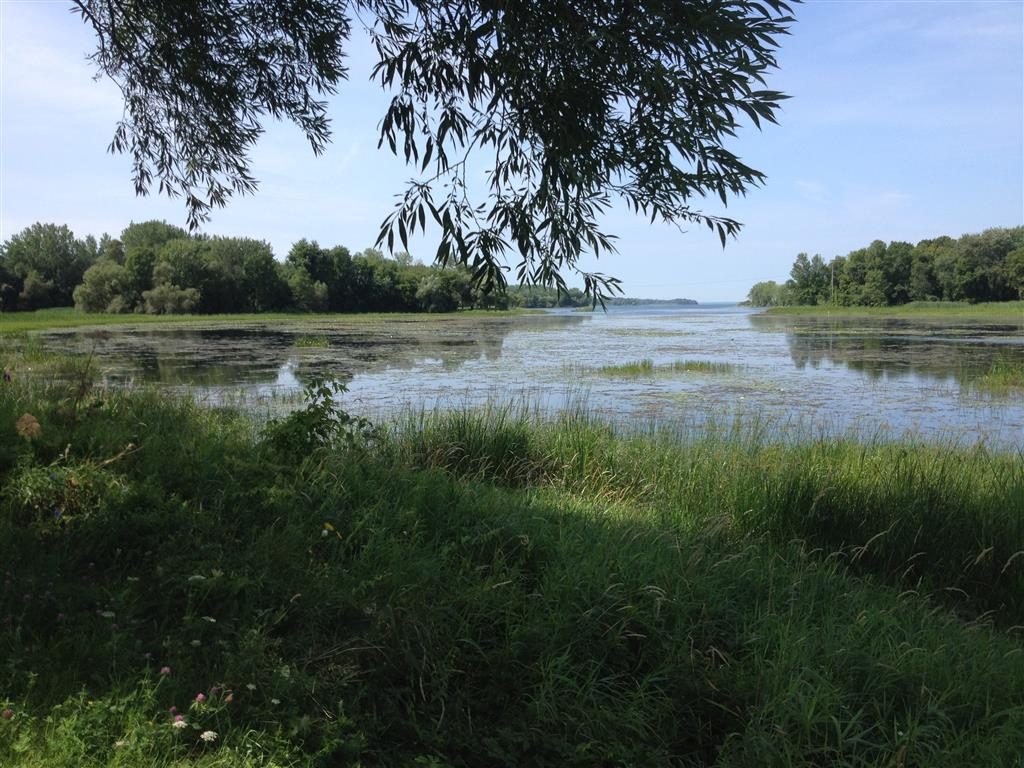 KEPO has developed a detailed design for the Recreation Bay to enhance the environment in the area and ensure the continued use for the community. In addition to the three flow enhancements mentioned above, three other areas in need of improvement have been identified. These include:

These measures, in conjunction with the dredging and maintenance of aquatic plants will restore and diversify ecosystems in the bay and create new opportunities for community enjoyment and use of the area.

KEPO hosted a public information and feedback kiosk on July 6, 2017  at the Services Complex, as well as two public open house events on May 24 2017 and October 16 2018 at the Golden Age Club. The open houses included the proposed designs for the restoration of the Recreation Bay area, including the strategy for dredging, aquatic plant management, the creation of natural areas and, after incorporating feedback from the community, the development of a beach. 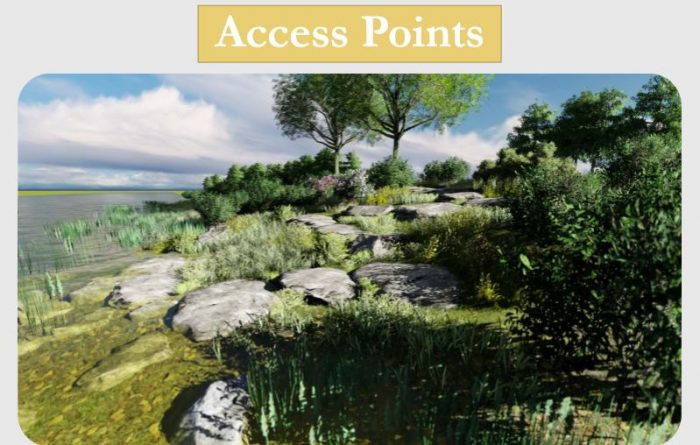 The Recreation Bay Restoration Project is projected to begin in 2020. KEPO will be communicating with the community on a regular basis, and a staff member will be on-site throughout this process to limit disruption as much as possible.

Your feedback and ideas for the Recreation Bay are always welcome. Please contact KEPO at (450) 635-0600. 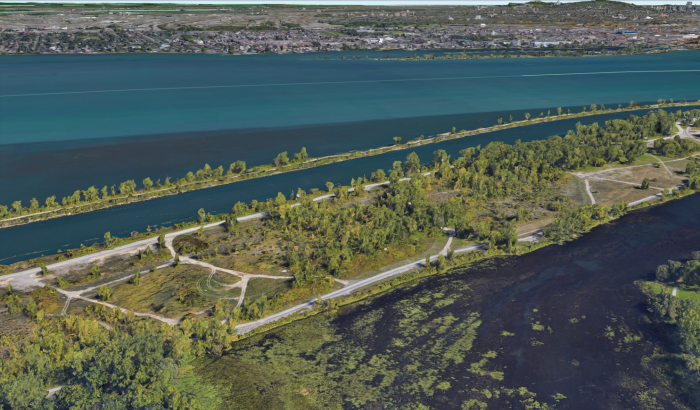 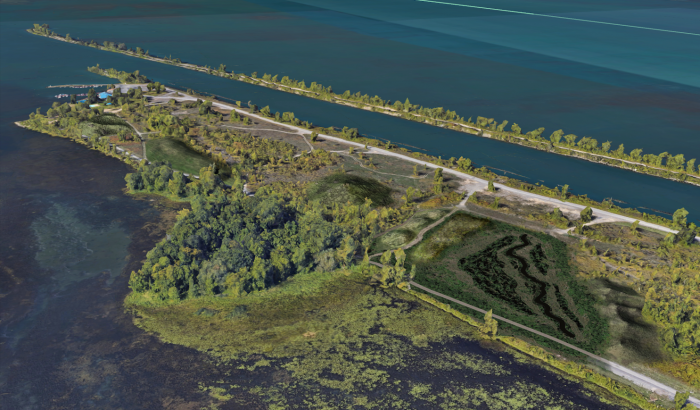